Hi! Since YA Book Recommendations Based on Your Favourite 2000s Teen TV Show was received so well, I decided to do a part two with popular teen shows from the 2010s. Most of these shows are some of my personal favourites from this time period and the shows I picked started airing — or primarily aired — during the 2010s.

1. If you liked Euphoria, read Kings, Queens and In-Betweens by Tanya Boteju

Perpetually awkward Nima Kumara-Clark is bored with her insular community of Bridgeton, in love with her straight girlfriend, and trying to move past her mother’s unexpected departure. After a bewildering encounter at a local festival, Nima finds herself suddenly immersed in the drag scene on the other side of town.

Macho drag kings, magical queens, new love interests, and surprising allies propel Nima both painfully and hilariously closer to a self she never knew she could be—one that can confidently express and accept love. But she’ll have to learn to accept lost love to get there.

For those that enjoyed Euphoria’s diverse stories and the intense relationships . . .

2. If you liked Pretty Little Liars, read These Vengeful Hearts by Katherine Laurin 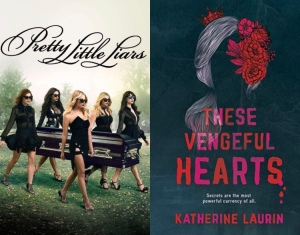 Anyone can ask the Red Court for a favor…but every request comes at a cost. And once the deed is done, you’re forever in their debt.

Whenever something scandalous happens at Heller High, the Red Court is the name on everyone’s lips. Its members–the most elite female students in the school–deal out social ruin and favors in equal measure, their true identities a secret known only to their ruthless leader: the Queen of Hearts.

Sixteen-year-old Ember Williams has seen firsthand the damage the Red Court can do. Two years ago, they caused the accident that left her older sister paralyzed. Now, Ember is determined to hold them accountable…by taking the Red Court down from the inside.

But crossing enemy lines will mean crossing moral boundaries, too–ones Ember may never be able to come back from. She always knew taking on the Red Court would come at a price, but will the cost of revenge be more than she’s willing to sacrifice?

For those that enjoyed Pretty Little Liar’s twists, turns and dark secrets in a high school setting . . .

3. If you liked The Society, read Gone by Michael Grant

In the blink of an eye, everyone disappears. Gone. Except for the young.

There are teens, but not one single adult. Just as suddenly, there are no phones, no internet, no television. No way to get help. And no way to figure out what’s happened.

Hunger threatens. Bullies rule. A sinister creature lurks. Animals are mutating. And the teens themselves are changing, developing new talents—unimaginable, dangerous, deadly powers—that grow stronger by the day. It’s a terrifying new world. Sides are being chosen, a fight is shaping up. Townies against rich kids. Bullies against the weak. Powerful against powerless. And time is running out: On your 15th birthday, you disappear just like everyone else…

For those that enjoyed The Society’s pseudo government ran by teenagers and the complicated dynamics without authority . . .

Beware of the woods and the dark, dank deep.

He’ll follow you home, and he won’t let you sleep.

Who are the Sawkill Girls?

Marion: the new girl. Awkward and plain, steady and dependable. Weighed down by tragedy and hungry for love she’s sure she’ll never find.

Zoey: the pariah. Luckless and lonely, hurting but hiding it. Aching with grief and dreaming of vanished girls. Maybe she’s broken—or maybe everyone else is.

Val: the queen bee. Gorgeous and privileged, ruthless and regal. Words like silk and eyes like knives, a heart made of secrets and a mouth full of lies.

Their stories come together on the island of Sawkill Rock, where gleaming horses graze in rolling pastures and cold waves crash against black cliffs. Where kids whisper the legend of an insidious monster at parties and around campfires.

Where girls have been disappearing for decades, stolen away by a ravenous evil no one has dared to fight… until now.

For those that enjoyed Stranger Thing’s small town setting with lots of strange disappearances and paranormal investigations . . .

5. If you liked Teen Wolf, read Shadow of the Fox by Julie Kagawa

One thousand years ago, the great Kami Dragon was summoned to grant a single terrible wish—and the land of Iwagoto was plunged into an age of darkness and chaos.

Now, for whoever holds the Scroll of a Thousand Prayers, a new wish will be granted. A new age is about to dawn.

Raised by monks in the isolated Silent Winds temple, Yumeko has trained all her life to hide her yokai nature. Half kitsune, half human, her skill with illusion is matched only by her penchant for mischief. Until the day her home is burned to the ground, her adoptive family is brutally slain and she is forced to flee for her life with the temple’s greatest treasure—one part of the ancient scroll.

There are many who would claim the dragon’s wish for their own. Kage Tatsumi, a mysterious samurai of the Shadow Clan, is one such hunter, under orders to retrieve the scroll…at any cost. Fate brings Kage and Yumeko together. With a promise to lead him to the scroll, an uneasy alliance is formed, offering Yumeko her best hope for survival. But he seeks what she has hidden away, and her deception could ultimately tear them both apart.

With an army of demons at her heels and the unlikeliest of allies at her side, Yumeko’s secrets are more than a matter of life or death. They are the key to the fate of the world itself.

For those that enjoyed season 3 of Teen Wolf — in particular the mythology surrounding the kitsune and Kira’s character . . .

6. If you liked Reign, read My Lady Jane by Cynthia Hand, Brodi Ashton and Jodi Meadows

Edward (long live the king) is the King of England. He’s also dying, which is inconvenient, as he’s only sixteen and he’d much rather be planning for his first kiss than considering who will inherit his crown…

Jane (reads too many books) is Edward’s cousin, and far more interested in books than romance. Unfortunately for Jane, Edward has arranged to marry her off to secure the line of succession. And there’s something a little odd about her intended…

Gifford (call him G) is a horse. That is, he’s an Eðian (eth-y-un, for the uninitiated). Every day at dawn he becomes a noble chestnut steed—but then he wakes at dusk with a mouthful of hay. It’s all very undignified.

The plot thickens as Edward, Jane, and G are drawn into a dangerous conspiracy. With the fate of the kingdom at stake, our heroes will have to engage in some conspiring of their own. But can they pull off their plan before it’s off with their heads?

For those that liked Reign’s alternative take on history . . .

7. If you liked Legacies, read Crave by Tracy Wolff 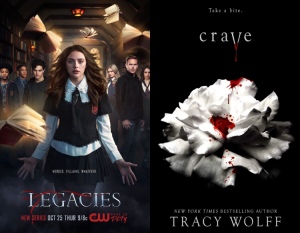 My whole world changed when I stepped inside the academy. Nothing is right about this place or the other students in it. Here I am, a mere mortal among gods…or monsters. I still can’t decide which of these warring factions I belong to, if I belong at all. I only know the one thing that unites them is their hatred of me.

Then there’s Jaxon Vega. A vampire with deadly secrets who hasn’t felt anything for a hundred years. But there’s something about him that calls to me, something broken in him that somehow fits with what’s broken in me.

Which could spell death for us all.

Because Jaxon walled himself off for a reason. And now someone wants to wake a sleeping monster, and I’m wondering if I was brought here intentionally—as the bait.

Whilst you all know my feelings on Crave, I can acknowledge other people might like it. This is for those that liked Legacies’ magical boarding school and the intricate romances . . .

Let me know your favourite 2010s show in the replies or your favourite couple!Mine is probably Stydia (Stiles and Lydia). If you’d like a third part to this, let me know because I have so many ideas still.

Great post! I’ve read some of the books so it was interesting to see them paired with similar shows (and vice versa). I have many more books to add to my TBR now! Thanks!

Thank you! I’m glad you found some new books at least 🥰

Loved this post, I saw most of these shows but never truly liked them except Teen Wolf, I will for sure check out that recommendation 🙂

Teen Wolf is probably my favourite on the list! I’m more partial to early 2000s shows myself.

Me too!!! Nowadays is very difficult for me to get into a show ;a;

Ugh RIP The Society 😪 Still so sad it was cancelled, especially when all that mystery is still. unsolved!! Some super good recs on here, though, I definitely need to check out a few! (:

I can’t believe it got cancelled! I’m still annoyed about it. I’m glad that you found some news recs though 🥰

Such a great idea! I would love to see another post of this kind, thank you for the recs!

Glad you liked it! And good to know you like this kind of thing.